In 1973, the WHA's first actual expansion teams were granted to Indianapolis and Phoenix, cities the NHL had snubbed a year earlier, the second rejection to Phoenix. Dubbed the Roadrunners, the team was granted to Arizona business mogul Ed Keller. Coached by Stan Hucul, they established a team made up some good young prospects, including Murray Keogan and ex-NHL'ers, such as Dennis Sobchuk and Robbie Ftorek. Because the league had grown to 14 teams, they had to re-align the divisions and the Roadrunners were placed in the potentially very tough western division. The team was fighting to make the playoffs and with the help of a late hot streak finished fourth in the division, 5 points out of second. Backed by solid defense and strong goaltending from Gary Kurt and Jack Norris, they finished with the third least in goals against. They went up against the tough Quebec Nordiques in their first playoff run, but were outclassed 4 games to 1. Hucul was recognized for his outstanding work nonetheless, taking the Coach of the Year award his first season behind the bench.

The team started out the '75-'76 with trepidation. Despite losing both the Cougars and the Stags/Blades, the league decided to expand a second time, granting franchises to Cincinnati and Indianapolis, keeping the 14 team, 3 division system. A welcome addition to the scoring ranks was Del Hall, who'd left the NHL and Golden Seals the year before. Hall's 47 goals put him in the top 5 in the league. Though losing Sobchuk and some other core players due to the expansion, Hucul and the Roadrunners regrouped and managed to finish second in the West, 5th best overall, due in part to the folding of both the Fighting Saints and the Spurs/Civics, both divisional rivals. That loss would force the league to re-design the playoff format. Phoenix was put up against divisional rivals San Diego Mariners in a best of 5 first round. The 2 teams battled back and forth but the Roadrunners lost in overtime in Game 5.

2 early playoff exits, plus the growing league instability began hurting the club's gate receipts in the '76-'77 season. Down to 12 teams, the league reverted back to a 2 divisional system, but with many of it's players going back to the NHL, the Roadrunners were going nowhere fast. Hucul had left the bench during the offseason and was replaced by Al Rollins. They finished the season dead last overall and a weak defense claimed the highest GAA. The one bright spot was the naming of Ftorek as League's Most Valuable Player. Ftorek was the only American to win the award, and only the second time in pro hockey history that a player from the league's worst team won the honours. The only other player to ever manage that was, coincidentally enough, Rollins when he played for the Black Hawks in the late 50's. Out of the playoffs and dismal crowds were killing the team. Losing in the neighborhood of $2,000,000 a season, Keller had had no choice but to sell off some of his players just to survive. Unable to get a new deal from Veterans Memorial Coliseum, he tried to sell the team to a group of local investors, but was unable. The team folded during the offseason.

The WHA's was actually not the first team Phoenix had dubbed the Roadrunners. One reason Keller was ever granted a club to begin with was the folding of the World Hockey League the year before. And keeping with tradition, the same name was used for their teams after the WHA, in the Central Hockey League and Pacific Hockey League in the 80's, and currently in the International Hockey League. Had Keller been able to hold out another 2 years, it's quite likely Phoenix would've made the cut to the NHL in 1979. If that were the case, the city would've almost undoubtedly built a replacement for the 12,000 outdated Vets Memorial, and the Roadrunners would still be tearing up the ice in the NHL today. As it turned out, Phoenix wouldn't be granted a team in the NHL until 20 years later, when the Jets flew out of Winnipeg and were dubbed the Coyotes, now owned by Wayne Gretzky, another WHA connection. 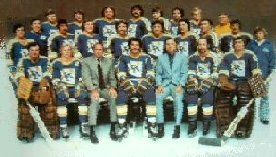